An Interview with Martin Wallace

We mentioned the Kickstarter campaign by designer Martin Wallace (Struggle of Empires, Age of Steam, and many more) for his game A Study in Emerald in our recent article Kickstarter Sampler. The man himself happens to be a new arrival to the beautiful shores of New Zealand—as is your humble correspondent, by coincidence—and he kindly agreed to find the time in his busy schedule of designing memorable games to discuss this new project. A Study in Emerald mixes Sherlock Holmes, Neil Gaiman, and H. P. Lovecraft—a thematic concoction any gamer worth the label will no doubt find irresistable …

Universal Head: Of course, I must begin with the classic question—what came first when you designed A Study in Emerald, the mechanics or the theme?

Wallace: 99% of the time I start with a theme. In this case the theme was the 19th anarchist movement, inspired by a book I picked up at random called The World that Never Was by Alex Butterworth. However, I had the feeling that a game about terrorism might not go down well in some quarters so came up with the brainwave of mixing it up with Neil Gaiman’s short story—nobody cares if you blow up monsters.

… you nearly only check for sanity when you perform certain actions. If you don’t want to go mad then don’t choose those actions.
UH: Are you a reader of Neil Gaiman’s work? Was it difficult to get permission to make a game out his short story and did he have any involvement? Is he interested in tabletop games?

Wallace: I got into Neil’s work after polishing off Terry Pratchett’s novels. Terry and Neil co-wrote one book, Good Omens. I then went on to read most of Neil’s other stories. It was not difficult to get the greenlight, I just emailed his US agent. Neil’s only involvement so far is to sign the contract and tweet about the game. Not sure if he is a gamer, I get the feeling he does not have the time to indulge.

UH: Have you played any other Cthulhu-themed games? If so, any favorites and why? Are you a reader of Lovecraft and the genre in general?

Wallace: I played a little Call of Cthulhu the role-playing game back in the 80s when it first appeared. I’ve read a little Lovecraft but am not an expert. Fortunately one of my gaming friends seems to know everything about Lovecraft’s work, so have used him as a consultant.

UH: Have you reused or developed any mechanics from any of your previous designs? Which ones? Any inspiration from other games?

Wallace: The core mechanic in the game is deck-building, which I have used in a few other designs, only one of which has been published (A Few Acres of Snow). Obviously the inspiration for this has been taken from Dominion. I’ve added a twist in that you have to bid for the cards you want to draft. The other mechanics in the game are pretty straightforward, so cannot say they have been taken from anywhere else.

UH: Any new mechanics/innovations that you’re particularly proud of in this game? Why? 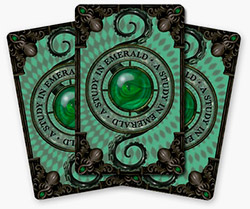 Wallace: I like the way the bidding for cards work. It feels more like a battle as some players fight for control of a particular card or city. If somebody is trying to summon an Old One then you get stuck in to block them. I’m also pleased with the victory conditions, which are based on secret identities. You are either a loyalist or restorationist. At the end of the game players reveal their identities. The side that is doing poorest on points is eliminated, which means that the player in the lead is not necessarily the winner if somebody else on his side is doing poorly. It means you have to be sure of everybody’s identity before ending the game.

UH: Did the game require much in the way of period research?

Wallace: I did some background research but not as much as I would do normally. Alex Butterworth’s book provided an immense amount of material—it was difficult deciding which characters to include and which to leave out.

UH: The fact that players are secretly aligned to a faction is interesting. Does this affect the play of the game more than the final reveal and scoring? In other words, is there be any cooperative element to the gameplay?

UH: When checking your sanity you draw a ‘sane’ or ‘mad’ counter, and three ‘mad’ counters can lose you the game of you’re a restorationist. Is this unbalancing, or very reliant on luck?

Wallace: There is some luck here. However, you nearly only check for sanity when you perform certain actions. If you don’t want to go mad then don’t choose those actions. It is also the case that sometimes you do want to go mad. The game ends if a Restorationist agent dies, so if you are ahead on points you are happy to die as you gain a posthumous victory.

It feels more like a battle as some players fight for control of a particular card or city. If somebody is trying to summon an Old One then you get stuck in to block them.

UH: This marks a bit of a change of pace for you thematically. Is this a new trend for your game designs?

Wallace: I like changing directions once in a while. I’ve done a lot of historically themed games, so I thought it would be good to work on some literary themes. Fantasy provides an excellent basis for a game as it allows for all things that can happen in the real world plus a lot of things that cannot happen. A lot of gamers play games to escape from the real world, so providing a fantasy world to play around in is not a bad thing to do. I’ve certainly got a few more ideas for games with a fantasy connection.

Wallace: Cashflow. 2012 was a mixed year for Treefrog and money was running low. There are a number of other projects in the pipeline, such as Moongha Invaders and The Witches, but they will not bring money in until after October. Personally I would prefer not to use Kickstarter, and I hope this will be the last game that I push in this manner. I would much rather publish a finished game and have people buy it based on the reviews. My opinion of Kickstarter is mixed. For me it has been very helpful, but I think it allows too many games that have not been properly developed to be released into the market. There are so many games being released now that it is beginning to have a real effect on established games companies, reducing their sales potential.

UH: What do you think is special about this game that will induce gamers to part with their cash?

Wallace: I figured that mixing Sherlock Holmes with H.P. Lovecraft and deck building, with Neil’s name on the box, would be incentive enough. It will be interesting to see the outcome.

UH: Any plans for the future you can tease readers with?

Wallace: I’ve already mentioned The Witches, which will be out this September. I’m also planning on releasing a two player card game based on the Field of Glory ancients miniature system. I’m also starting to cook up some ideas for a New Zealand themed game, but not one simply rehashing the history of the land. I like to say more but it’s still a fledgling idea.

UH: Thankyou for taking the time to talk to the Esoteric Order of Gamers Martin!

You can read the Neil Gaiman short story that inspired the game here: PDF link. The Kickstarter campaign for A Study in Emerald is close to achieving its twice its original £30,000 goal, and there is still 23 days to go! Head on over and pledge your support to the Old Ones …

A Study in Emerald by Martin Wallace: Kickstarter Campaign

A Study in EmeraldCthulhuLovecraftMartin Wallace
Sign up for the newsletter