The clunkily-named Command & Colors: Ancients uses the same Richard Borg card-driven system used in Memoir ’44 and BattleLore, but it could be argued it is most successful here, with the addition of leaders and a bit more complexity. Ancient battles between Rome and Carthage are covered in the core set, and expansion sets have followed. It’s not as well-produced as the other two games, and it annoys me that they plonked a logo in the middle of the (card) game board, but the wooden blocks with stickers on them have appeal! 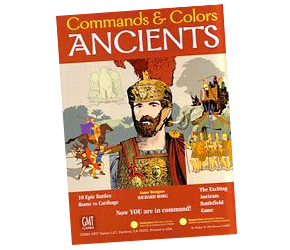