Wait no longer, step into the legend!

Back in February 2015, 16,038 Kickstarter backers pledged $3,327,757 to see newcomer Monolith’s Conan game become a reality. Delivery was planned in October, but it wasn’t until a year later, at the end of November 2016, that I got the core box, and an extra box of stretch goals, in my quivering hands. All par for the course for Kickstarter campaigns really. And in the end, Conan is an excellent game, though it lacks that final level of polish and support that would have come from a more experienced company.

The miniatures are mostly excellent, though there are some signs that were done at different times by different sculptors – some of them are in almost a different scale. The rulebooks were universally panned. Why don’t new publishers learn to get professionals in to write and design rulebooks? In the end it’s just cost them bad press and extra expense. The scenarios often need quite a bit of online research for clarifications before you can start playing. Also frustrating is the huge amount of extra plastic that has no rules and doesn’t appear in scenarios. Great figures, sure, but Monolith really needs to back this stuff up with more scenarios – thankfully, new scenarios are appearing on their website, and a campaign book was recently released.

On the positive side, Conan is a refreshing scenario-driven skirmish game with a flexible and ingenious activation system based on ‘energy gems’. It’s particularly nice how players can share their turns: activating movement, combat and other abilities when they’re most needed. It’s amazing no one came up with this break from strict turn-based systems before. When it works, it’s a fast-paced, cinematic game that really captures the feel of a key scene in a fantasy film. And there’s nothing like the time when you you’ve sent Conan off on an axe-swinging rampage, only to have him come up short at the crucial moment because he’s run out of puff. 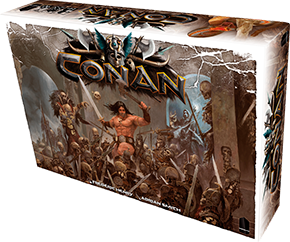