Command the most powerful soldiers in the galaxy!

Mantic Games, sometimes called the poor man’s Games Workshop but probably more aptly titled the person-with-a-normal-income’s Games Workshop, continue to pillage their inspiration’s back catalogue with this thinly disguised take on Necromunda. That all sounds critical, but it’s not! Games Workshop needs a reasonably-priced competitor, and Necromunda is one of my favourite games, criminally ignored for years by GW—so I’m happy to own Deadzone and I’m glad Mantic made it.

There’s nothing original in the way of theme here—it’s The Thing meets Warhammer 40K—but never mind, it’s just an excuse for some good old-fashioned squad-level biffo with some boxy terrain and pretty standard models. Necromunda, despite being released in 1995 (or perhaps because of being released in 1995, considering production costs these days) still holds the crown for the best urban terrain in a game. Deadzone’s modular plastic cube system is fine once you’ve built and painted some structures, but the connector system is fiddly and breakable and no where near as modular and ‘clip-together’ as Mantic advertises. The figures are somewhat uninspired, and the ‘restic’ plastic makes cleanup difficult (and there is a lot of cleanup) and time consuming. The lack of assembly instructions is unforgiveable, as is the way the pictures of the terrain and miniatures on the box don’t match what you get inside. More attention to detail, Mantic. However the mousemat-material play mat is nice.

It took a crapload of construction, modelling and painting to get it on the table, and it’s not a job for beginners, so I made a series of videos on the preparation, construction and painting of the Deadzone components, and a two-part battle report video.

After just a few years Mantic decided it was time to ‘update and improve’ Deadzone, so another Kickstarter campaign later, Deadzone Second Edition has arrived. According to Mantic it is ‘ faster, bloodier and easier to learn’, and while I wish I’d played more games of the original system, after all the time I put into making the original rules summary and reference, simplicity is probably a good thing in this case. First edition was a bit fiddly. Plus, they’ve improved the quality of the original figures by making them in a decent hard plastic this time. 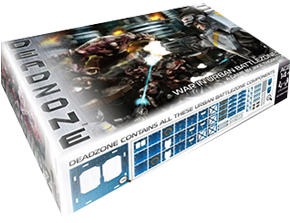