Dungeons & Dragons adventure in a board game.

In 2003 someone at Parker Brothers must have remembered the big success of Heroquest back in the early 90s and decided to create something very similar with this D&D-branded simple dungeoncrawl game. Still, a great way to introduce young kids to adventure games and chock full of plastic figures, though with less personality than the inspiration. While it’s a good game for dungeoncrawl completists, it probably never quite recaptured the magic of the more popular game. 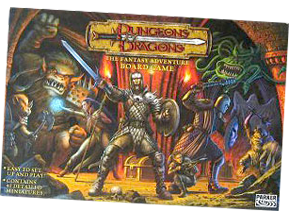