What if WWII was weird?

Well, here we are again, the third time I’ve completely redone my rules summary for Dust Tactics/Battlefield/Warfare/1947! The Dust road has been a long and troubled one, but after the Kickstarter debacle that saw Paolo Parente and Battlefront part ways, Dust was resurrected again by Parente’s Dust Studio as Dust 1947.

Dust Studio re-released a lot of the existing units in new boxes, and re-wrote the rules and the unit cards. It took years, but some new minis came out too, most notably for a Mythos faction that introduced Cthulhu and cultists and the like – an addition that well, didn’t really feel Dust-like to me. The almost mythical alien Vrill, long-promised, never did get delivered however, which was a shame.

I put off trying out the new rules as I was somewhat frustrated by the many changes over the years, but a recent podcast convinced me to give the new rules a try, and in fact go back to the original grid system that Dust was designed for. Yes, you can still play Dust 1947 as a normal tabletop miniatures game, but for ease of play, you can just use map tiles divided into squares instead. And in fact, everything about this new system seems simplified after Battlefront’s go at making Dust a more traditional tabletop miniatures game. The special abilities are certainly simplified, for a start. I haven’t yet got the game to the table, but I have made new unit cards for all my existing miniatures, and one day I’ll get a battle report video together to show you how it plays.

Eventually however, exacerbated by the global situation, Dust Studios closed up shop this year in 2022, and once again the future of Dust is uncertain. I’ve got boxes of the stuff, and certainly enough to play with for many a year, so that doesn’t bother me too much. But it is sad to see such a long-running property come to a close. Perhaps one day it will be back again, with another publisher – in which case, I’ll probably be redoing this rules summary and reference yet again! 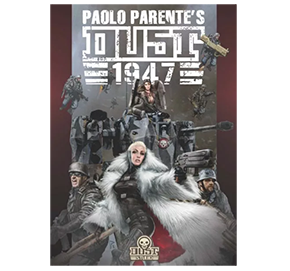