Get ready to fight the war anew!

The Rackham scifi tabletop miniatures game AT-43 was originally going to use the Dust licence, and be an ‘alternative WWII plus scifi and supernatural’ game based on that world created by Italian illustrator Paolo Parente. But instead AT-43 became far-future sci-fi (though still with a recognisable WWII feel) and eventually died out along with Rackham, and Parente and his collaborators continued with their own miniatures game, which became Dust Tactics and is now published by Fantasy Flight Games. And to go full circle, there’s also now a set of tabletop rules using Dust miniatures: Dust Warfare.

Dust Tactics is a boardgame/miniatures game hybrid. At first I thought this was a disadvantage, but after playing the game I can see that despite the simple rules, there’s a lot of flexibility and possibilities for this game, and it successfully manages to be ‘cinematic’ in feel despite the simplicity.

So how does it work? The key to the game is the simplicity. Games are played on terrain squares (or a paper mat in the revised edition), each of which is divided into nine squares. Instead of using a tape measure to measure the moves of each miniature, you simply put the five man squad or robot tank in a square. Line of sight is then measured between central dots in the square, with some easy rules for soft and hard cover. When you shoot or engage in close combat, you refer to each unit’s card, which not only has a nice big picture of the relevant miniature(s), but a few lines detailing the weapons it uses, their range, how many dice they roll and how much damage they do per hit. Dice marked with hit symbols on two faces do the rest.

If it’s so simple, why is it so good? That’s the magic of gaming. It takes just a few minutes to explain the rules, and after a round or two you begin to realise the game has a lot more to it than is immediately apparent. One of these surprising realisations is that the square movement grid, coupled with the differing abilities and specialisations of the units, gives the game an almost chess-like feel. Far from charging into conflict right away, you begin to identify which of your units and which of your opponent’s were the long range specialists, which were especially effective at close combat, and how to avoid, or move quickly to engage, the appropriate units.

During each of your unit activations you get two actions: you can move and shoot, or shoot and move, or move twice, or shoot twice (actually shoot once and get a re-roll on misses). Some units are a bit faster than the others, and some can jump obstacles, so movement isn’t at all predictable, and good use of cover (you get two ammo crates for soft cover and two tank traps for hard cover) makes a big difference to your long-term survival. Combat is quite deadly, so one mistake can spell disaster. However with a healthy dollop of luck, anything can happen and the outcome was always in doubt.

But beyond all that, the game has that special something that gets you laughing, cheering and most importantly, imagining the scene. On the table, a few plastic models move about on cardboard tiles, but it’s easy to imagine the real scene—as the Allied robot tank rumbled forward and let fly with a stream of napalm over the Germans, the German tank grabbed it with its claw, ripping its turret off while the squads let fly with laser rifles around their feet—and to me, that’s the hallmark of a great game that you are going to come back to again and again. I call it the ‘cinematic value’ of a game, and it’s there when the rules recede into the background and you feel like a movie is playing out on the table before you.

In the core game, there’s a series of scenarios that link together into a mini-campaign. There’s a nice range of challenges from ambushes, survival, demolition to straight-up slugfests. As you get to know your units you’ll be trying out different strategies and chosing different forces (especially armed with a few expansion units), so there’s lots of replay value even before you embark on the extra campaigns already available separately.

Dust Tactics is the perfect game for those gamers who love miniatures wargaming but don’t have the time to get into more complex and extensive systems, but it also promises a lot for the gaming hobbyist, with campaign expansions and lots of additional miniatures, including planes, available already.

I forked out for the ‘premium’ painted edition (the original and the revised sets) because I have enough painting on the backburner, and the miniatures are very well done.

This latest version of my summary and reference pack is for the revised core rules and all the current expansions. 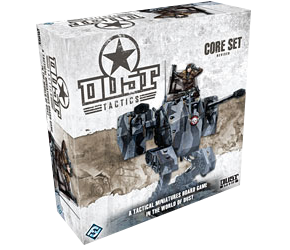