For anyone waiting until the dust settled before getting into Dust Tactics, it’s been a confusing ride over the last few years. First there was the original ‘big box’ Dust Tactics (with normal and premium pre-painted versions); then Fantasy Flight revised the core set into a smaller box and called it the Revised edition. Then a tabletop version called Dust Warfare was released. Finally, the licence was passed to Battlefront Miniatures, and here we are with Dust Tactics Second Edition (or sometimes, Dust Tactics 2.0).

The confusion doesn’t end there though. Dust Warfare seems to be floating in limbo while this new version of Dust Tactics is a 112-page rulebook that includes both the original ‘boardgame’ rules, plus a very similar version designed for the tabletop called Dust Tactics Battlefield.

I only played Warfare once, and while it had its own charms, I definitely think it was a smart move to make the tabletop version almost the same as the boardgame version. Now you have one set of cards (for gamers there at the start like me, this is the second time I’ll be replacing my unit cards) and pretty much one set of rules. Even better, the myriad special rules and abilities are virtually the same. Things were far more confusing when we had two different rules systems. Kudos to Battlefront for simplifying matters, though I’m relieved I only ever forked out for the PDF versions of the Warfare rules.

I’m not as satisfied with the new dice. The original dice had a wonderful simplicity to them—just hit or blank sides—that was iconic for the game, and now results vary between three symbols (one of which changes depending on the faction-themed dice you use). I just find it hard to get used to the faction symbol—rather than the hit symbol—being a hit in most circumstances. I’m sure I’ll get used to it eventually and no doubt the increased flexibility was required, but it does seem a shame to lose something that made the game so distinctive.

In any case, this new era for Dust Tactics was, sadly nipped in the bud by a poorly-run Kickstarter and embarrassingly public stoushes between Dust Studio and Battlefront that resulted in the partnership being dissolved. Again, the future of Dust is in doubt, and I wonder if its reputation among gamers can be resurrected yet again. Despite everything, there are plenty of great models available at low prices (the vehicles are fantastic, though I would like to see more variation and dynamism in the infantry models). And there’s still some hope of one day being an alien faction to spice things up a bit…

Here are rules summaries and reference sheets for both Dust Tactics and Dust Tactics Battlefront; despite the repetition I’ve kept these separate so you can use the right sheets for the right game. To avoid confusion! 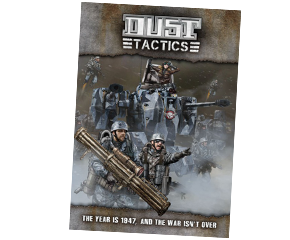