Originally published in 2004 and designed by Alan R. Moon, Ticket to Ride has won numerous awards and sold over a million copies. Why is it so popular? Probably because it’s the perfect ‘gateway’ game. This means it is the kind of game that is perfect for playing with people whose previous experience with boardgames has been mainstream games such as Monopoly and Scrabble. The rules are easy to learn, the theme is straightforward, it’s a nice blend between luck and strategy, and it’s always a hit with new players.

Basically, Ticket to Ride is a game of set collection. Players try and collect sets of matching coloured cards, which they can then trade in to place rows of their train carriages on the board, connecting routes between cities and scoring points for doing so.

Highly recommended for gamers and non-gamers alike. The Europe version adds ferries, tunnels and stations to the mix, and the Swiss version is especially good for two players. The Marklin Edition is played on map of Germany and introduces Passengers and Merchandise to the gameplay; plus every one of the 118 train cards features a different image of a Marklin model train car or locomotive. Train hobbyists can tell you that Marklin has been around for over 140 years and is the world’s leader in the miniature train hobby. Nordic Countries takes the train routes through Denmark, Finland, Norway and Sweden, and is especially designed for 2-3 players.

There are also dice, card and digital versions available.

Note the original game rules summary here includes the variants given in the 1910 expansion. 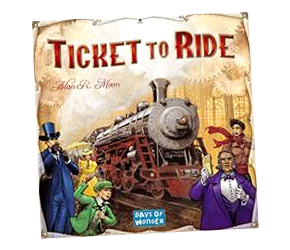