Welcome to the World of Tékumel 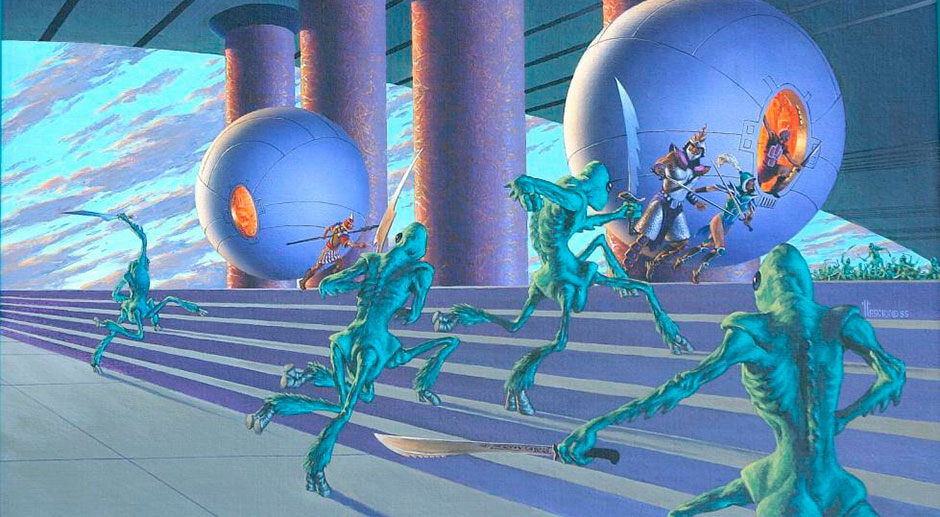 What kind of a world, then is Tékumel?

An introduction to Tékumel, an incredible fantasy world with a long and storied history.

The game that changed my life was Empire of the Petal Throne. What a title that is: evocative and intriguing. What mysterious world lurks beyond those words?

In 1978 I was twelve years old and first encountered this beautiful game, the first roleplaying game I had ever seen. Later I discovered something called Dungeons & Dragons, but Professor M.A.R Barker’s world gripped me from the first moment I beheld that strangely-illustrated box, the ring-bound rulebook, and especially those colourful maps printed on thick, high quality paper. It was a game almost impossibly beautiful, and impossibly expensive at twenty-five dollars. I never did own a copy back then (in fact I was in my late 30s before I finally got my hands on a mint-condition original) and my friend’s copy was so valuable he never brought it to school; so in fact our first games were strangely simplified (I remember a lot of chests ‘rising from the ground’ in the underworld). He did however allow me to photocopy the entire book, and this was back in the days when photocopies were on shiny paper …

Yes, the dungeons were called ‘underworlds’, and what terrifying, otherworldy places they were. Indescribably ancient tombs and buried cities, haunted by completely alien creatures like the Nshé, a creature made entirely of water, or the horrific Ssú, ‘the enemy of mankind’, who smelled of musty cinnamon and made a creepy chiming sound …

I travelled in India that year and as I explored ancient Indian monuments my mind kept floating back to Tékumel.

Tékumel (pronounced TAY-koo-mayl) lodged itself in my 12-year-old imagination and has never let go. But I moved on to other things and it was much, much later—1998 in fact—when I thought about Tékumel again, and decided to make a website about Professor Barker’s world. Tékumel.com, later to become the official website, was born. I travelled in India that year and as I explored ancient Indian monuments my mind kept floating back to the website and how I could use the textures I was photographing in its design. Countless hours of work and several complete redesigns later it is not only the official home for Tékumel on the web but a vast repository of background information, gaming history and archival material (and there’s another big redesign planned). I corresponded briefly with the Professor himself—how excited my 12-year-old self would have been!—and got involved with several Tékumel-related projects. Sadly, the Professor (‘Phil’ to his friends) left us for Lord Belkhánu’s Isles of the Excellent Dead three years ago. Since then, the people at the Tékumel Foundation have worked hard to preserve his legacy, cataloging the huge amount of material he left behind, and ensuring that the world of Tékumel lives on. Mysteriously, Tékumel stubbornly refuses to achieve mainstream fame. Despite the incredible complexity of the world and its cultures—Professor Barker was a linguist and even developed several complete languages—Tékumel remains known mostly in roleplaying circles. When I first began the website, I often called for extending the world into other mediums, but the sticking point was always cost. Unlike Tolkien’s Middle-Earth, Tékumel has no Lord of the Rings to ensure its commercial success. The Professor did write five entertaining novels (starting with The Man of Gold, now available as an ebook for Kindle, Nook, and Kobo), but no masterwork to bring his world to a wider public.

And perhaps, it is the very originality of Tékumel that keeps it from being understood and enjoyed by more people. Of course there are the dauntingly unpronounceable names (eg, Mu’ugalavyá, Hrü’ü, Dhi’chuné … though following the Professor’s linguistic rules rewards the reader with beautifully sounding words that roll off the tongue), the strange cultural mix of ancient India, South-East Asia and Central America; the complex and eon-long histories; the intricate religious structures; the alien (to Western culture at least) concepts of clan membership and honour. All these things are a barrier to the reader used to Tolkiean tropes of elves and dwarves. Despite Tékumel’s strong roots in golden age pulp fiction, there are surprisingly modern concepts: for example, equality of the sexes (despite society’s clan-based systems, women can declare themselves Aridáni and enjoy all the rights and opportunities of men), and an inclusive and relaxed sexuality (same-sex relationships are an accepted way of life on Tékumel). Barker’s creatures and nonhuman races are weird and wonderful; bizarrely alien at first but quickly memorable. The militaristic, armoured reptilian Shén, the four-armed and four-legged Ahoggyá, the insectoid Pé Chói—creatures with distinct cultural personalities and cultures. The gods and their cohorts, divided into those of Change and Stability, are real beings, worshipped in the form of innumerable aspects, and intricately wound up in the life of every citizen of Tékumel. Magic, too, is a part of life on Tékumel, an advantage born of the thinner ‘skin’ between its reality and the Planes Beyond.

Looming behind it all is Tékumel’s incredible age: the cultures are not only tens of thousands of years old, but stretch back to a pre-cataclysmic time when the planet was terraformed and inhabited by our future selves. Somehow thrust into a pocket dimension, the stars went out, the continents shifted and Tékumel was left to rebuild itself in isolation from the rest of Humanspace. So, in the best tradition of golden age fiction, science fiction elements also permeate the fantasy of Tékumel: deeply buried transportation systems, ancient engines deep beneath the planet’s surface, ‘magical’ devices such as the rare Eyes that can freeze an enemy in an unending stasis or return the dead to life.

Indeed, everywhere you look, there is something more to discover. Professor Barker, games-mastering his famous ‘Thursday night’ role-playing game sessions, knew his world inside-out, and encouraged the brilliant conceit that it existed somewhere in a parallel universe (one correspondent described to him a certain person he met in his own game; the Professor responded “I know him well” and offered further details about the man). It always struck me how clever this was: not only did it make Tékumel feel ‘real’, but it encouraged healthy collaboration with like-minded participants in his fantasy that led to its further development. A discussion group called ‘The Blue Room’ was bursting with hundreds of pages of this kind of shared world-building, in which the most obscure details of the world were examined and elaborated upon by the kind of remarkably intelligent and educated people that Tékumel seems to attract.

But the EOG is a games site after all, so what about the games? After Empire of the Petal Throne came two boxed sets called Swords & Glory in 1983, Volume 1 of which is the most comprehensive book of background material for the setting ever published. Volume 2 was an incomplete set of roleplaying mechanics, for sadly, Volume 3 was never completed. Another ten years passed until Gardásiyal: Deeds of Glory, a boxed set with a strange character development system that involved separate adventure books. After another decade Tékumel: Empire of the Petal Throne was the first comprehensive RPG-system-and-background hardback, but its publisher was short-lived. In between these RPGs were published innumerable fanzines and supplementary booklets.

Which brings us, finally, to last year and the publication of Béthorm: The Plane of Tékumel. It is this latest publication I’ll be reviewing in my next article about Tékumel. In the meantime, if you’re interested in this incredible world, visit Tékumel.com to learn more.

Béthorm: The Plane of TékumelDungeons & DragonsOSRTékumelThe Empire of the Petal Throne
Sign up for the newsletter