Way back in August 2013 I made my contribution (Ancient King level: all 5 factions plus large monsters) to the Wrath of Kings miniatures game Kickstarter campaign, and a bit over a year and a half later over 200 figures requiring assembling and painting arrived in the mail and hit my hobby table. It’s a big project, and you could probably say I have enough games of this type. But as a big fan of Rackham’s Confrontation, I couldn’t resist another game so obviously inspired by it, and in fact employing some of that game’s original sculptors. In a time when so many miniatures are designed in the computer and can seriously lack character, these little fighting men and women and beasties are bursting with personality.

The rules, thankfully, are pretty straightforward; in fact I managed to get all of the basic rules on one side of an A4 sheet. Of course there’s a plethora of special abilities and exceptions, described in very literal fashion in tiny type on the backs of graphically busy unit cards, but that’s par for the course for this kind of game. The game plays very well (check out my battle reports) and I think it may even replace Confrontation as my fantasy tabletop game of choice—especially when a quicker game is in order. 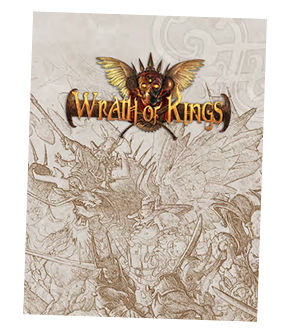